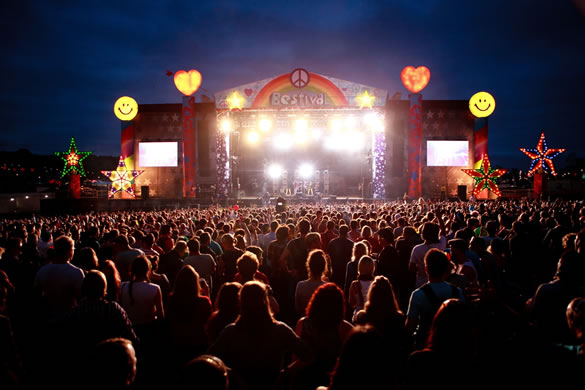 Standing at Southampton ferry port, restless, disgruntled and a damn sight redder than I was when I started. Four hours in a ferry queue, drinking lukewarm lager has taken its toll on team moral. Nevertheless, one claustrophobic ferry ride, a fortunate taxi ride and a labored dragging of baggage and alcohol later, we’d made it. Through the darkness of night and lethargy, a neon paradise of weird and wonderful filled our tired eyes as we stepped towards the entrance. And, if only momentarily, each one of us traded our ability to inhale for a floor-bound jaw and a swift bout of amnesia, erasing all memory of the last six hours.

Fast-forward to 2013 and the memories are still of the fondest variety. The prospect of a reunion was already exciting, but this time the stakes are higher; 10th birthday of Bestival higher. If history has taught us anything, it’s that birthdays are synonymous with one word – no, not cake! – party.

The line-up for this year is nothing short of incredible! This year’s ensemble cast consists of musical legends – Sir Elton John, Snoop Dogg and Fatboy Slim plus Wu-Tang Clan, The Flaming Lips, The Roots – along with a host of music’s modern heroes and new arrivals, with the likes of Franz Ferdinand, Disclosure, Bombay Bicycle Club, Tom Odell, James Blake and many more lending their talents to the spectacle.

Originally garnering an audience in the region of 10,000, the festival now boasts attendance rates far nearer the 60,000 mark, which is a testament to the organizers – Rob da Bank and wife Josie – high level of work and strife to improve since it began back in 2004. This is also the first year – and they are also the first festival – to offer festival-goers a ‘weekly payment plan’, allowing fans to pay off their tickets in increments, helping those who don’t have the initial funds up front.

Returning to the Isle of Wight is naturally something I’m very much looking forward to. In terms of individual highlights though, I’d be lying if I said I wasn’t absolutely clucking at the prospect of seeing the aforementioned legends.

Sir Elton John is surely worth seeing for the sheer experience. Arguably this year’s Stevie Wonder (2012), Sir Elton will undoubtedly come equipped with a back catalogue capable of inducing emotions you never knew you had. From the pop and eclecticism of ‘Crocodile Rock’, and ‘Bennie & the Jets’, to the ballad of ‘Rocket Man’, all the way down to cigarette-lighter-provoking tracks like ‘Your Song’ and ‘Candle in the Wind’.

The introduction of Snoop Dogg – or Snoop Lion, I’ll let you decide – and Wu-Tang Clan to the line-up was a bold statement in itself. Snoop Dogg represents two decades worth of West Coast gangster rap and hip-hop, whilst also being – quite literally – one of the coolest men on the planet.

Factor in the eclectic East Coast entourage that is Wu-Tang Clan – whose debut album Enter the Wu-Tang (36 Chambers) is credited with reinvigorating New York City hip-hop – and it makes for a potent combination, made more interesting by the nature of East and West Coast rivalries that have occurred in recent years. Here’s hoping they’re playing on separate days…

My final personal highlight has to be The Flaming Lips. Engrained on me as a youth by my musically literate father, their psychedelic rock echoes the ghost of Pink Floyd, while channeling their own unique, modern take on the genre. The Flaming Lips produces a strange, flamboyant style that gets into the very matter of your brain, plants seeds and blossoms into a plethora of heterogeneous sounds. I can certainly see myself FaceTiming my old man throughout.

In aid of their self-proclaimed diversity and distinctive nature, there are a number of eccentric acts and entertainers accompanying the music. The first standout for me in this arena – being a lover of all things film – is the Films in the Forest feature, set up in the middle of the Ambient Forest (which is, having experienced it two years ago, as cool as it sounds). Bestival have selected a number of short films – courtesy of Branchage and London Short Films – to provide the weary, more relaxed band of gig-goers the chance to sit down and unwind to something a little different.

The other two sideshows I’m dying to dabble in are Howard Marks and Scroobius Pip’s very own ‘Satin Lizard Lounge’. Marks is a both a character and a cult-legend, famous for his smuggling of marijuana between 1970 and 1987, but also for his insightful views on life, both of which have become a much sought after attraction. The Satin Lizard Lounge showcases an array of spoken-word artists, all of whom have been hand picked by the master himself, Scroobius Pip, which promises to offer up a surplus of wordplay and witticism.

For those who are more interested in sampling food between music than watching poets and preachers, then fear not. The Temple Island offers a whole host of culinary delights, with the most notable on the list being a stall by the name of Rainbo. This particular fare – which comes served from the back of a 1948 Ford pickup truck – offers Gyoza (Japanese dumplings), spring rolls, samosas and more.

It would seem that our two years apart has only done Bestival the world of good (I’d hope to say the same for myself, but the jury is still out on that one). Nevertheless, with an incredible line-up, playing across the ever-more-multifarious backdrop, the 10th birthday of Bestival is shaping up to be the social event of the year; and given the arsenal that it seems to have conjured up, it certainly looks like delivering.

Bestival takes place at Robin Hill Country Park, Isle of Wight from the 5th to 8th of September.